My name is John W Losh II from Kansas City, Missouri. Though I have never worked for a railroad, I come from a lot of railroad stock. My Paternal Grandfather John Losh, whose namesake I am was a career man with Chicago, Burlington & Quincy. He lied about his age when he was 15 so he could join his brother Leonard Losh on the CB&Q and help support their sisters after both of their parents died.

His assignments included the Birmingham, Missouri Depot and time in Keokuk, Iowa. He served as a Track Supervisor. After one of my best friends of 20+ years discovered in 2008 that we are actually related, and I began researching my family, I also wanted to find out more about my Grandfather as he passed in 1964 and I wasn’t born until 1969. His wife, my paternal grandmother Twyla Losh later retired from a restaurant formerly located in North Kansas City, Missouri that was open to the public during the day but was mainly for railroad personnel to eat and sleep at, known as Loretta’s N & W (Norfolk & Western) Cafe. 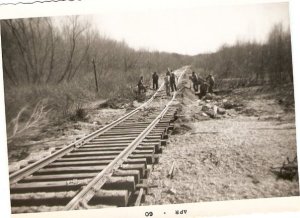 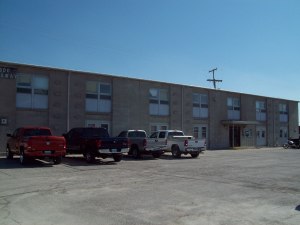 Our family was on vacation when he made this discovery. Later that week, we were returning to Kansas City from Port Charlotte, Florida  and I was sitting on a car at the Incline Railway in Chattanooga, Tennessee when I realized one way to learn more about my grandfather would be to find out more about  the railroad he worked for. One day I typed in “CB&Q History” and the first thing  that popped up was a  page from the site http://mypresentpast.com/ . It is a genealogy and extensive railroad site. It turned out to belong to a local guy who is the Uncle of one of my childhood friends that already knew me and whose father worked with my Grandfather on the CB&Q. The specific page that appeared featured a list of the 1949 CB&Q Birmingham, Missouri Track Supervisors, including my Grandfather.

We all soon got together over lunch and so I could hear stories of their time working together on the CB&Q Railroad.There were also many pics and documents on the site that detail Mr Engel’s career with CB&Q.

Tom Jacobs-owner of mypresentpast.com and his Father Gene, who worked with my Grandfather John Losh on the CB&Q Railroad at the KC/Liberty Corner Cafe

One of the many great photos you will find on http://www.mypresentpast.com

I soon started going to railroad and transportation museums when possible anytime my family travels on vacations-which is 3-4 times a year and taking pics at sites where individual train cars are displayed as monuments, as well as local and other rail-yards I encounter in our travels.

Me with an old CB&Q car at the Museum Of Transportation-St Louis, Mo in 2008 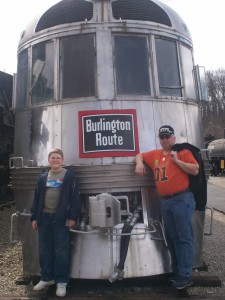 My son John Losj III and I with a CB&Q/Burlington Route Zephyr at the Museum of Transportation-St Louis, Missouri in 2008

A Sign on at the bottom of a CB&Q car at the Museum Of Transportation-St Louis, Missouri in 2008

My wife Denise’s late paternal grandfather William Roy Mapes Sr and some of her father’s brothers worked (and some still work on) the Kansas City Southern Railroad. They were in the Mulberry/Pittsburg Kansas area. Once I discovered relatives on my grandfather’s side (Losh) that I had never met, but now attend yearly reunions with in Willow Springs, Missouri, my cousin Stephen Losh informed me of Losh family members that had worked on the Missouri Pacific Railroad.

Story about Sanford Losh of the Missouri Pacific Railroad

I later started a railroad collection in my many-themed rec room and began collecting individual model railroad cars-usually looking for those related to the CB&Q/Burlington Route, Norfolk & Western, KC Southern and Missouri Pacific, as well as photos, post-cards, pins, mugs and more. I have joined/followed lots of professional and model railroad related social media pages. I started a CB&Q Facebook Page. I have friends on social media that work in railroads.

I even started writing a railroads book by the same title of this blog, but due to varying circumstances, decided for now that a railroads blog that would be ongoing  and I could update from various places and devices would be a better fit……for  now.

Most of my life I have lived, and worked where I am either driving past, on bridges over, or just hearing trains in the distance daily. Our local amusement park-Worlds Of Fun that I grew up going to, worked at in my teens as did my wife and later our son, that also has a railroad is just three blocks west of our home.

I host a weekly radio show-”Losh-Man’s Hollywood Classics” that airs Sundays Noon-1pm CT on http://www.1027thehog.com/ . I recently did a show with my friend Bill Dennington from Austell, Georgia as a call-in guest. In addition to being the founder and Pastor of the Harvest Fire Church, Bill is also an engineer on both the Six Flags and Stone Mountain Park Railroads. The theme of the show we did was classic railroad movies. Bill also shared stories of interactions he has had with Johnny Cash and Jimmy Stewart that revolve around his involvement in railroading.

So now, my goal is to continue to learn more connections in my family to railroads and also to learn  about anyone out there who may have worked with those family members and have stories to share about them. To continue to visit railroad museums, and take in model railroad exhibits when possible. To share the stories of those facilities in words and pictures. To continue to add to my railroads collection. And  to learn and feature more stories from those who have, or are still leaving Legacies……..On The Rails !

Here is a great song that my grandparents loved and will always make me think of them.